have food allergies in the U.S. That’s roughly two children in every classroom.

in medical procedures to treat severe reactions to food between 2007 and 2016. Two-thirds of these reactions were in children.

of children with food allergies have experienced a severe allergic reaction.

Introducing a variety of foods into a baby’s diet early and often is recommended - and may even help lower the risk of certain food allergies.

In the 1990s and early 2000s, parents were told that babies, and especially those considered at risk for food allergies, should avoid many allergy-causing foods until age one or even older. Thanks to new research, this advice has changed. In fact, studies show that introducing a variety of foods early is now recommended. Early typically means at six months but can be as early as four months.

Parents should always work with their pediatrician or allergist on when to introduce foods, especially if your baby shows signs of being at higher risk for food allergies, like having severe eczema. 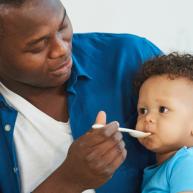 Does your baby have a higher risk of developing certain food allergies? Take Our Assessment

FARE has invested nearly $3 million in game-changing discoveries that highlight the benefits of early introduction. New research is changing how foods are introduced to babies.

Up to 80% of peanut allergies are preventable for high risk infants.

The Learning Early About Peanut Allergy (LEAP) and LEAP-On studies showed that feeding peanut foods early to babies at high risk for peanut allergy reduced their chances of developing a peanut allergy by 80 percent.

For some children at higher risk for allergies to milk, peanut, egg, sesame, fish or wheat, the Enquiring About Tolerance (EAT) study indicates that introducing these foods early has the potential to lower the risk of developing these allergies, particularly egg.

A varied diet may help reduce the risk of developing a food allergy.

Studies suggest that feeding your baby a larger or more diverse number of foods or food groups might lower the risk of food allergy.

Updated guidelines on when and how to introduce foods to babies have changed how pediatricians advise new parents about early diet and allergy risk.

What is a food allergy? How do I know if my baby is having a reaction?

A food allergy happens when a person’s immune system reacts to a food protein because it has mistaken that food protein as a threat. The body’s response is what we know as an allergic reaction. The first symptoms of the allergic reaction usually appear within minutes or up to two hours after exposure to a food. Symptoms can range from mild to severe or even life-threatening and can occur alone or in combination. If you have any concerns about your baby’s response to a new food, seek medical attention or call 9-1-1 right away.

Has Your Baby Been Diagnosed With a Food Allergy?

If your baby is diagnosed with a food allergy, FARE is here to help you access essential information and resources to make sure you have what you need to make informed decision about what to do next 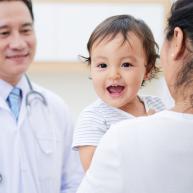 Questions to Ask to Your Pediatrician About Introducing Solid Foods 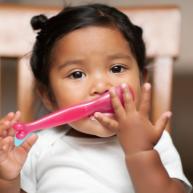 Early Introduction Straight from the Experts

Recent landmark studies and guidelines are changing the way we think about early food introduction. Learn more in this webinar.

FARE’s mission is to improve the quality of life and the health of individuals with food allergies, and to provide them hope through the promise of new treatments.